"Billy Yank"
also known as "Victory, Jewel of the Soul"

Rudolph Thiem sized the statue so that it would stand in a proper and harmonious relation to the monument below it. He designed the figure of the soldier to be seen in the round, from a variety of angles. The proportions and composition of the large soldier create striking silhouettes from the four quarters of the compass. 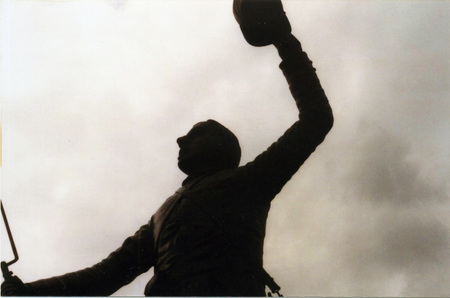 Courtesy of Tom and Becky Thiem
Whooping it up is what makes the soldier a notable figure in that day and age. He is shouting “hurrah.” To capture the soldier’s expression, Thiem modelled the face in clay while looking at himself in a mirror and shouting for joy (Blount, “Nameless Private. . .” 36). The artist transferred to the wet clay the image, lines, and musculature of his own face, transformed by strong emotion. Billy Yank represents no one person in particular, and yet his face, unlike so many “memorial soldier” faces, is not generic. It has features of Thiem’s own likeness.

The private thrusts his cap into the air. He shouts. Such exultation over a battlefield success was true-to-life, but it was not often depicted in a Union soldier statue. At the time, sculptors and their sponsors felt that emotional expressions of victory rubbed salt in the wounds of Southerners, who were, after all, the losers.

Thiem’s design clashed with the idea that “memorial soldier” figures should be reflective rather than jubilant. It was believed that the restrained “Billy Yank” statues of the time, by not ruffling Southern sensitivities, helped heal the wounds and bitter feelings that still divided North and South. This thinking lay behind the routine designs of memorials put up in numerous town squares.

Hamilton’s Billy Yank, however, revels in victory. A contemporary news article picks up on this right away. It describes Thiem’s soldier, “with the face aglow with triumph and with both face and figure so poised as to seem to shout to the south east, even as far as Richmond, Virginia, . . . “Victory.” (“Theim’s [sic] Victory Figure,” Republican News, May 7, 1904, p. 7.)

Hamilton’s Billy Yank is exceptional in another way. This soldier is a mere youth—not the seasoned trooper seen in most memorials. Lack of facial hair is the marker of his youth. In fact, mature Union volunteers sported mustaches and beards. A news reporter, on seeing the clay model displayed in Thiem’s studio, described the statue as “a young Amerian volunteer soldier, a beardless youth of 20 or 21 years of age . . . .” (“Theim’s Victory Figure” Republican News, May 7, 1904, p. 7).

The youthfulness of Thiem’s Billy Yank is well-suited to his boyish elation. Adolescence and joy over a “battle won” give the statue a strong story element rarely found in other town memorials. It is clear that the soldier’s joy is not for the end of the war, but for a single battle won. As a contemporary reporter, who interviewed Thiem, put it, the soldier is “in the attitude of rejoicing over a wartime victory” (italics added, “Thiem’s Life . . .” p. 5). 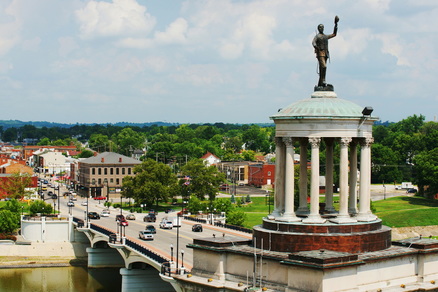 Courtesy of Jack Armstrong
The figure is a hundred feet in the air. He is part of the sky. His stance and gesture are so cleanly articulated they create a bold outline, even when seen from a considerable distance.

The perfect siting of the statue on the edge of the great river made the soldier highly visible. The riverside location helped ensure the statue’s legacy in another way. Nine years after Billy Yank was raised to the top of the monument, he witnessed, and survived, the terrible flood of 1913, which killed hundreds of people in the county.

A contemporary photograph pointedly shows the statue standing unharmed above a scene of wrack and ruin—the bridge over the river utterly destroyed. Two years later, a photograph from 1915 includes Billy Yank watching over the construction of the new bridge. For Butler County citizens, the nameless soldier became a symbol of human endurance.
When World War II ended, an enormous V for “Victory” was hung on the monument crowned by Thiem’s Victory (Blount, “Ear-shattering ritual,” Journal News, Feb. 24, 1980, F-1). Later still, the silhouette of Hamilton’s most beloved statue became the logo of Butler County and part of the city’s official flag (Blount, “Nameless Private,” Journal News, 36).

A number of Rudolph Thiem’s sculptural works have been destroyed, stolen, or are no longer traceable. The great Victory statue, however, has withstood the ravages of time. Thiem’s emotional tribute to the common soldier still rises above the banks of the river. Billy Yank is too high up to be stolen, too renowned to be forgotten.

How Thiem Beat his Rivals and Won the Bid

Butler County’s Monument Committee opened bids for a bronze statue in 1903. Rudolph Thiem’s submission occurred during a national epidemic of Civil War statuary, much of it mass-produced from the same cookie-cutter pattern. The “statuemania” of the time led the Cincinnati Enquirer to comment in 1887: “It is not impossible that the building of statues is being pressed a trifle too far”  (Oct. 29, p. 4). Every town wanted its memorial. Surviving Civil War veterans had begun to reach their sixties. These men felt a keen desire to commemorate the war. Because so many state officials and congressmen of the time had fought in the war, county and state governments showed a willingness to bankroll the projects.

This was the context in which the eight aging Civil War veterans of the Monument Committee met to decide who of the four finalists would receive the statue commission. Thiem’s three competitors were nationally-recognized sculptors. Clement Barnhorn (b. 1857) taught sculpture at the Cincinnati Academy of Art. Rudolph Schwarz (b. 1866, Vienna) was a major contributor to Indianapolis’s massive Soldiers and Sailors Monument (1902). Alice Ruggles Kitson (b. 1871, Massachusetts), the only woman contestant, had exhibited four of her works at the World’s Columbian Exposition in 1893, and was the first woman admitted to the National Sculpture Society (1895).

Despite the distinction of the other applicants, the eight committee members voted unanimously for Thiem’s design on November 5th, 1903. He won the contract for several reasons. The committee knew Thiem’s earlier Civil War relief of Colonel Ferdinand Vanderveer, commanding officer of Ohio’s 35th Volunteers. (A photo of this relief is shown on the Bronze & Wood page of this website.) Three members of the Monument Committee had, in fact, accompanied Thiem’s medallion to the Chickamauga battlefield. In addition, Thiem’s bid of $3,250 was $250 less than the two other low bids, which came in at $3,500. Finally, Thiem’s statue, seventeen feet in height, had more stature than the fourteen- and eight-footers offered by the competition. (Minute Book. Monument Building. 1898-1906. 157-158.) 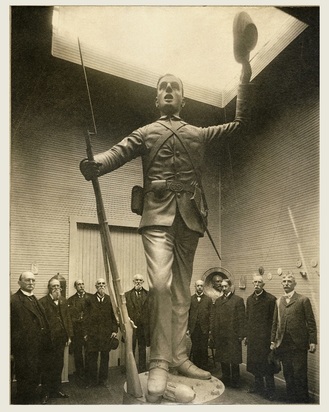 The Monument Committee of Civil War veterans visits Thiem’s Studio, April 20, 1904. Photo taken by Chris Schwenn. Courtesy of the Butler County Museum.
Thiem finished the colossal clay model of the soldier in April 1904, and displayed it in the sky-lit studio he had designed to contain the work. On April 20th, the committee members came to view the statue—a visit strikingly recorded in a photograph taken for the occasion by Chris Schwenn. (Minute Book. Monument Building. 1898-1906, 159.)

The Victory statue was successfully cast in bronze by the Hamilton Metal Pattern Works that November. A small army of men hoisted the 3,500 pound soldier a hundred feet in the air to the top of the Monument on December 1st—an achievement in its own right.

Hamilton was industrial, and the great bronze statue showed off what the city could accomplish in fine metal casting. A reporter wrote that the statue was “credited with being the largest piece of work of the kind ever cast in the state of Ohio” (“Thiem’s Life” 5). He also wrote that the victory the soldier “proclaimed” included the “victory of modern achievement, through art and manufacture and engineering . . . .” (“Thiem’s Life”).

Those who have questions or comments about Rudolph Thiem and “Billy Yank” can contact Jon Thiem through the Contact page of this website. While researching a book-length study of Rudolph Thiem’s life and times, Jon has come across new material that throws further light on the statue and its genesis.
(Click on any image throughout the site to enlarge)
Powered by