An interesting side track in Thiem’s career as an artist was his three-year stint, from 1886 to 1889, as a full-time designer of cast iron stove ornaments. He was in his late twenties. In this period, he married a Hamilton woman, Anna Martin, and their first child was born. It was stove design that brought Thiem from New Orleans to Hamilton, Ohio.

The business of “Riess and Thiem” in New Orleans had not prospered. In 1886, Thiem had decided to go back to Germany, but then the stove maker Lazard Kahn persuaded him to come up to Hamilton, Ohio, and create stove decorations for his expanding company, F. & L. Kahn Bros. Thiem stayed with the Kahns for three years.

The shift from sculpture to stove decoration might seem like a comedown for a sculptor with high aspirations, and yet it was not unusual for nineteenth-century artists, even prominent ones, to take on commercial work to make ends meet in times of spotty demand for sculpture. During his first decade in Hamilton, Rudolph Thiem faced the perennial dilemma of artists in that industrial age: how to make a living and at the same time preserve a measure of artistic autonomy in the choice of projects and means of expression. Industrial art proved a helpful stepping stone to Thiem. For the longer term, however, he decided on a more independent course. 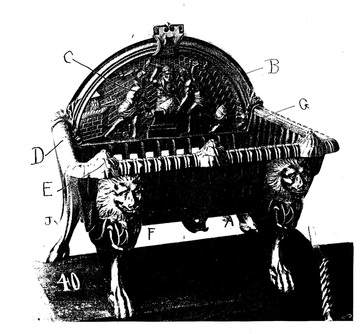 Fire basket with an arched fire back depicting a scene in relief. Iron. Patented by Kahn and Thiem, 1888. The patent application includes a photograph of a prototype, but it is uncertain if it ever went into production.
He worked closely with Lazard Kahn. Together they designed several cast iron stoves for parlors and kitchens. They also patented an interesting fire basket for use in open-door stoves and fireplaces. The decoration of the iron basket addresses the shift from artistic craftmanship (represented by Thiem) to mass production (represented by Lazard Kahn).

A fire basket in the late 1880s, when efficient gas stoves had already been introduced, was rapidly becoming a “vintage” object. The Thiem/Kahn fire basket is as much an art work as a useful household fixture. Kahn clearly intended to tap into a market of affluent buyers who, for nostalgic reasons, wanted to reinstate the traditional hearth—the open fireplaces and open-door stoves whose time had past. The closed cast iron stove had taken over the heating and cooking needs of most Americans.

Thiem and Kahn’s decoration draws on this nostalgia. The arched back panel of the fire basket immediately catches a viewer’s attention. It shows three blacksmiths of the ancient world hammering into shape a piece of body armor, a breast plate. This subject is somewhat ironic because the fire basket, which the relief adorns, and the relief itself, were intended to be made through mass production, not by a traditional handicraft.

Like a painting that depicts an artist in the act of painting, Thiem’s design is self reflexive. The fire basket is destined to be inside a fireplace, and the back of the fire basket depicts a scene with a fireplace (a smith’s forge), seen in the lefthand corner of the relief.  Another “mirror effect” is this: ancient metal workers are represented on the back panel of an iron object that will be produced by modern metal workers. The mirror effect calls attention to differing methods of artistic production. The fire basket itself is a utilitarian object. It is also a work of art. The subject matter of the panel relief on the fire basket evokes both utility and beauty. The breastplate being made by the ancient metal smiths is useful, but it is also ornamental, for it contains the low relief of a head.

All this mirroring is not just a display of cleverness. It is also a playful expression of serious concerns in that era. The contrast between the modern cookie-cutter production of art work for useful objects and the old craft methods was much debated in this phase of widespread industrialization. As an artist-craftsman working in a factory, Thiem understood both sides of the question.

In the second half of 1880s, Thiem and Kahn received several U.S. patents for stove designs.

Today, Kahns’ “Estate” stoves are sought by collectors. Many are available because the foundry in Hamilton was a large-scale producer and major player in the national market. Whether or not Rudolph Thiem had a hand in the design of the antique Kahn stoves we see today is difficult to say. Pattern makers did not sign their stoves. And style is not a foolproof sign of attribution, because decorative motifs tended to be highly conventional. As a result, our knowledge of Thiem’s industrial design work in this period comes mainly from the drawings he submitted to the U.S. patent office, rather than from the physical objects themselves. 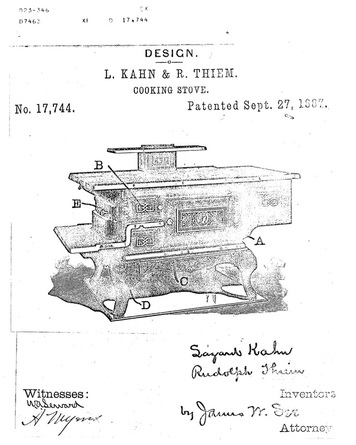 Cooking stove. Cast Iron. Patented by Kahn and Thiem, 1887. The illustration is a scan of a poorly-reproduced drawing from the U.S. Patent office.
The decoration on the cookstove (to the left) relies on rectilinear patterns, as in the frames that set off the stove doors (Design No. 17,774, Sept. 27, 1887). Thiem softens the angularities with swirls of stylized foliage. According to the patent description, the “skirt” of the stove is “ornamented by a fanciful shield flanked by representations of ferns, . . . the ends of the skirting beyond the ferns being ornamented by foliate scrolls.” The main door of the cook stove features the profile of a woman’s head in relief.
After leaving the Kahns foundry in 1889, Thiem continued to patent his stove ornaments as a free-lance designer, licensing them to stove makers in Kentucky, Tennessee, and Georgia. Here are three examples of the flamboyant style of decoration common in this period:

The thorough ornamentation of these three designs reflects that horror of empty surfaces characteristic of high Victorian popular taste, just at it is about to go out of fashion. Such hyper embellishment—with its insistence on curvilinear figures and curling acanthus leaves— suggests that Thiem conceived these stoves as high end models.